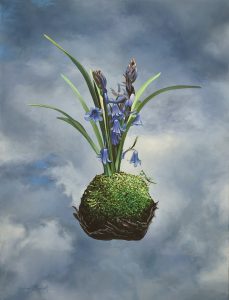 This is the first in a new series around the idea of plants that wander the sky. All around the idea of migration and wandering. It’s well known that seeds can be dispersed around the globe on the trade winds of the world. Imagine if an ecosystem evolved along those wind paths. Interesting visual possibilities at least.  There’s also the meanings to be drawn from the associations between the plant and the sky background.

All works are originals Dismiss